Sitting together with their knitting needles, Claris Bryden (left) and Norma Bridgland (middle) prove that there are no barriers to achievement.

With their friend Joan Torr (right), Claris and Norma are wonderful examples of the power of staying active during recent months.

They’re part of a group that has been knitting its way to better mental health at Villa Vincent Aged Care Facility in Townsville.

Claris and Norma are both visually impaired but it hasn’t stopped their remarkable knitting progress, nor their ability to grow their friendship.

Over the years, knitting has been suggested as a cure for many ailments from depression and anxiety to rheumatism and even insomnia.

One study has shown that more than 20 per cent of people who knit have experienced pain relief from the activity.

We recently embarked on a project at Ozcare that is unlocking the potential of residents including 92-year-old Claris.

Like some of her friends involved in the project, she knits from feel and memory because she is vision impaired – making it almost impossible to see the wool and knitting needles in her hands.

Her enthusiasm for knitting is infectious – Claris has turned out dozens of beautifully-finished woollen scarves from spending hour after hour with needles in hands.

Although it has been a lifelong passion for Claris, it is the enriching connections that she has made with other women, like Norma and Joan, that are making all the difference to her mood. 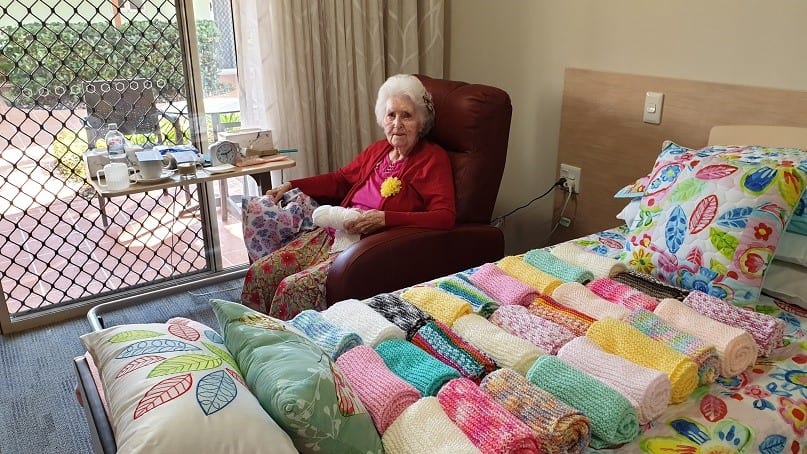 Above: Claris and her beautiful woollen scarves

These other women, who are both aged 88, have also overcome great physical challenges to take up the craft of knitting again – and they too are enjoying it.

Norma has managed to turn out 40 cosy and colourful beanies that she has given to other residents to stay warm during winter – an astonishing effort for someone who is legally blind.

Despite having arthritis, Joan remains fiercely determined to knit for her family – at the moment she is finishing off a Cowboys blanket for her daughter who is a big fan of the rugby league team in Townsville.

They have all found friendship and laughter and shared stories of their childhoods in the process.

Just recently, two of the women discovered they attended the same school and grew up just streets away from one another.

The time spent knitting together has led to a lot of conversations and reminiscing about days or yore.

We understand current restrictions have meant that many seniors in our communities are feeling the impacts of social isolation.

However, in an aged care setting, those people living with memory loss are finding ways to connect.

Within Ozcare, we are really looking forward to seeing how our knitting project evolves in coming months.

We have plenty of stock for our Christmas craft stall – including knitted coat hangers and crocheted tea towels. But the ongoing health benefits are our main focus.

For Claris, it helps as she struggles with the loss of her husband.

When she is not knitting, she is exercising her hands with a ball to help with her arthritis.

In Joan’s large family, every one was taught to knit from a young age, even her brothers.

And Norma knits from memory alone after she was taught the craft as a child.

Now knitting is helping these women find connections and alleviate stress and pain. For more information on our services or accessing a service in your area, contact 1800 Ozcare.

Request A Call Back